Featuring a history of ryodoraku practice and methods 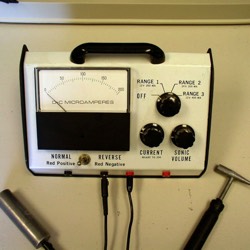 In 1950, Yoshio Nakatani M.D., Ph.D. was measuring electrical resistance of the skin in an edematous patient with nephritis, when he found a line, similar to the kidney meridian of acupuncture, that had a series of points at which increased electrical conductance was measured on the surface of the skin. He carefully checked this phenomenon in 10 other patients with kidney disease and found it present in all, while it was never present in healthy subjects. Because this line offered increased electrical conductance, and seemed to follow the traditional kidney meridian, he named this line, the kidney “ryodoraku” (ryo=good, ‘do=(electro) conductive, ‘raku=line.) A better English translation might be, “good electrical pathway.”

Upon further research, Dr. Nakatani found other ryodoraku lines, corresponding to organ disorders, and following the classical Chinese meridian pathways. He named the lines for their origins either on the hands or feet, designated “H” or “F.” Thus H1-H6 are the 6 ryodoraku of the arm, which begin or end on the hand, and F1-F6 are the 6 ryodoraku of the leg, which begin or end on the foot. Often, these designations are used interchangeably with the classical Chinese meridian organ names. Thus, H1 is the lung meridian, H2 is the pericardium meridian, and so on.

As the ryodoraku lines were investigated further, it was discovered that excessive resistance, and consequent poor electrical conduction, also followed the ryodoraku lines. Thus, the lines were capable of both excessive and deficient electrical conductance. These measurements were correlated with patient symptoms, and various symptoms charts resulted.

The hand and foot meridians were measured at points on the wrists and ankles. These points are commonly known in traditional Chinese acupuncture as “Source” points or “Yuan” points. Today, these points are also known as “Nakatani” points in honor of Dr. Nakatani.

Dr. Nakatani refined his procedures to encompass both diagnosis and treatment. Diagnosis was performed with an electrical instrument that measured electrical conductivity of the skin. By measuring the conductivity of each meridian, energetic excesses and deficiencies could be located and charted. Treatment consisted of stimulating specific acupuncture points to either “tonify” a deficient meridian, or “sedate” an excessive meridian. An additional set of acupuncture points was used to balance meridians that showed significant energetic differences between the right and left sides of the body. These imbalances, referred to as “split” meridians, were treated with a set of acupuncture points called “Luo” points in Chinese acupuncture.

Because all patients have different electrical conductivity potentials, measurements were never absolute, but rather were taken relative to all other measurements on the same patient. Thus, the deviation from the average measurement was far more important than the actual measurement itself. Deviation was determined by plotting the ryodoraku measurements on a chart and looking for outliers from the mean. To assist in locating outliers, the practitioner drew two lines designed to encompass the majority of measurements, in an area known as the “physiological corridor.” The measurements outside the lines were deemed abnormal, and treatment was applied to restore balance to these abnormal meridians. This was the beginning of meridian graphing.

The technique has evolved and advanced significantly since the 1950’s when Dr. Nakatani did his research. The current state of the art includes computerized measurement equipment and advanced statistical interpretation of results for accurate treatment recommendations. In addition, techniques based on Ryodoraku measurements have become more accepted among mainstream acupuncture practitioners, and are now taught in top acupuncture schools.

The purpose of this website is to provide a centralized catalog of the research behind this valuable technique.